These days you can find any kind of food in Dubai. Anything from east to west. Sometimes if you go to a restaurant and ask for Chinese food, they might get confused. You might need to be a little more specific because there is so much of everything.

So what is the traditional Emirati food? This is a question often asked by those who visit Dubai. The fact is that the Emirati cuisine has undergone a lot of changes in the past century. Most of those living in Dubai have not eaten authentic Traditional food of the UAE. Even the young Emiratis don’t have them every day, especially those who live in the more cosmopolitan parts of the country, like Dubai.

Even when you go to an Arabic restaurant, most of the items on the menu are Lebanese or Egyptian dishes. Hummus, one of the most loved dishes in the UAE, is, in fact, Levantine in its origin. And that’s okay because traditions and cuisines undergo lots of givings and takings as they evolve. But for now, we are wearing the hat of a gastronomical puritanist.

Like everywhere, Emirati food also reflected the culture, climate, and resources of the region. It has undergone many changes. After the discovery of oil and with the influx of expats, their cuisine underwent a lot of changes. For instance, chicken meat is a relatively new addition to the food habit in Dubai. Before that, they used camels, goats, and other birds like houbaras for meat. Because of the prevalent trade of fishing among emiratis, fish was a significant part of the dishes.

Here we look at the major dishes that are considered native by the Emiratis themselves. We will cover them one by one from breakfast dishes to dinner and desserts.

A combination of sweet and salty elements. It is a breakfast dish made with omelet and vermicelli. Sugar, cinnamon, saffron, cardamom, and orange blossom or rose water are added for flavor. Spices are added to the sweetened vermicelli, and the whole preparation is topped with a thin egg omelet.

Balaleet is breakfast food and a dessert at the same time. It is an inevitable part of Iftars and Eid celebration for Emiratis. A close relative of Balaleet can be found in other cuisines. The Persian Faloodeh and Indian Sheer Khurma are similar ceremonial dishes made of vermicelli.

For breakfast, Balaleet is served warm while it should be cold when eaten as a dessert. Sometimes garbanzo beans and black-eyed beans also accompany Balaleet. Legends have it that Balaleet became a part of Emirati cuisine when they experimented with the pasta.

To say in simple terms, Shakshuka is just scrambled eggs with tomato and pepper. On top of tomato, there will be thyme and coriander. Instead of scrambling the eggs, there is a different style of shakshuka with poached eggs. Shakshuka is a simple and nutritious breakfast dish that can be made with everyday ingredients in the kitchen and also with a single skillet. 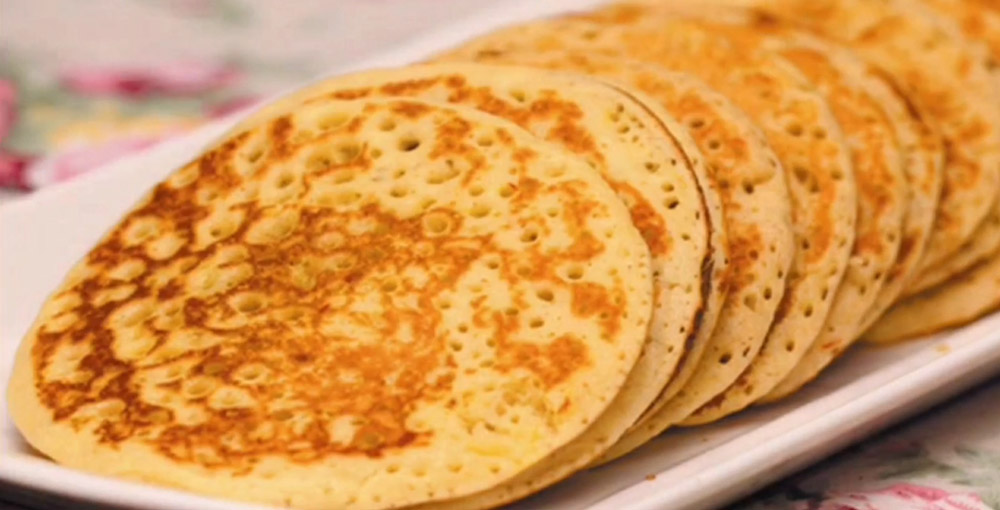 A thin,crisp and sweet bread that looks and feels a lot like the American pancake. The main ingredients of the chebab bread are flour, egg, melted butter, and yeast. Some Fennel and a dash of turmeric will make it even better. The name chabab comes from the fact that the bread is cooked until it’s light brown or golden yellow on both sides.

The chabab bread and Chami cheese (or Kraft cream cheese) are usually served together. Chami is a salty cheese made from buttermilk. Date syrup and honey will top the chebab bread. Sometimes It is garnished with sesame seeds as well. Serve this breakfast dish hot.

This can easily qualify as the softest bread in the world. Khameer bread is a round, puffy, flatbread with two layers that separate easily. Instead of sugar, dates are used to sweeten this bread. Fennel, saffron, and cardamom are used as flavoring agents in the bread. You need an oven to make this. Back in the old days, Arabs used coal ovens to bake khameer bread .

With a sprinkle of sesame seeds garnished on top, the khameer bread might remind you of the burger bun. While eating, you can split the layers apart and fill butter or cream inside. The bread is so soft that a fresh Khameer will melt with a touch of your tongue.

Reqaq is a crispy paper-thin bread made of whole wheat flour. The dough is flattened and cooked in a pan or a hot iron plate. This is almost similar to the Indian flatbread chapati. The name Reqaq itself is from the Arabic word reqa, meaning thin.

This the most common type of Emirati bread and a staple regularly made in Emirati homes, especially for dinner during Ramadan. Reqaq is served with the meat dish Tharyd (Fareed in some dialects). If you like it sweet, roll the bread and pour some honey into it or have it with cheese and sugar.

Basically, this is boiled chickpeas but with red chilies and spices. The dish lasts long without spoiling. Hence, Arabs carried this with them when they went on long journeys through deserts. Dango can be prepared in a whim. And for that reason, it is also a popular evening snack.

Dango is an Emirati take on the Levantine Hummus. But instead of making the chickpeas into a paste, here they are simply boiled to soft with salt and spices.

To shorten the cooking time, the chickpeas have to be soaked in water overnight. The water used to boil the peas is not thrown away. It is reused to prepare soups and stews.

A very ancient and the most needed dish during ceremonies and gatherings. The preparation method is unique and time-consuming. It takes at least 3 hours of continuous boiling. It will take even longer if the meat is added.

Hareeth is a wheat porridge with meat and ghee. The wheat has to be cooked for straight three hours in salted water until it fluffs up. That will take about 3 hours. Then the meat is added to the mix and heated again to form a thick porridge.

After cooking, some ghee is added on top. Hareeth is always served hot. You can have it plain or with a little sugar. Some also serve it dressed with chopped onion. After all the hours of cooking, Hareeth is so easy to digest and moreish.

There are a hundred ways to grill a fish, and this is the Emirati way. Traditionally, Samak Mashwi is cooked in a dome-like barbecue made of clay. The fish is pinned on a stick and put in the barbecue with the other end of the stick fixed to the bed of coal at an oblique angle.

Date paste mixed in the marinade gives it a unique taste from other grilled fish. To properly fix the fish on the stick, you need a big fish. Preferably a round and fat one. Fish is cooked unscaled, and the scales are removed before serving. The scales help keep the flesh from breaking apart in the heat.

Often mispronounced as Fareed, Thereed is a popular iftar dish in UAE. It is preferred for breaking fast because it is light on the stomach. Thereed is a meat stew with large pieces of potatoes. You can make it with chicken or lamb. But if you have a taste for vegetables, make it with that.

The closest relative to Thereed in any other cuisine is the Tagine, which is popular in morocco. Thereed combines the rich flavors of meat and potatoes with vegetables. If you want to enjoy it the best, have it with raqaq bread.

Rice was not originally a part of the traditional food of UAE. Emirati Arabs borrowed it from the Indian and Persian traders a few centuries ago. Before that, the main cereal was wheat. Machboos is the most popular rice dish in the Emirati cuisine. It’s loved by both locals and expats alike. But their way of preparation is different.

Machboos can be prepared with chicken, lamb or fish. The main flavorings are cloves, cardamom, cinnamon, lemon, and sometimes saffron. Machboos is in fact an Emirati adoption of Indian biryani. Among all types of machboos, lamb machboos is the crowd favorite.

A delicious and much coveted dish in Emirati cuisine. Ouzi is rice prepared with spices and lamb meat. Almonds and pine nuts are also a part of the final preparation. If you are looking for how to enjoy lamb meat in its best way possible, Ouzi is the answer. You will find this on the center of the table in a large container in every Emirati function.

This dish has to be cooked in large quantities. Therefore, it is a perfect option for large groups. So when guests come to visit Emirati homes, Ouzi is to be expected. But Ouzi has to be planned ahead as the lamb requires a marination of 24 hours before cooking. Have Ouzi with some yogurt and tomato sauce.

These are sweet fried dumplings made of milk, sugar, butter, and flour and then covered in date syrup. Luqaimat is undoubtedly the most popular traditional dessert. Though a bit calorific, these are too good to resist.

The outside of Luqaimat is crunchy, while the inside is soft and spongy. They are dipped in date syrup and garnished with sesame seeds. Flavoring is done with cardamom and saffron. Just like the dessert, Luqaimat in Arabic means small or bite sized.

A classic dessert made of pumpkin. This pudding, which is also known as Assidat al Boubar, is mildly sweet. Apart from pumpkin, flour, cardamom, saffron (okay by this time you know that Emiratis add cardamom in almost everything), and sugar are the main ingredients. Add rose water and honey for flavor and nuts on top for decoration. And have it warm for the best taste.

A simple yet delicious dessert made of dates. The mixture of date paste, wheat flour, and nut of your choice is baked with spices like cardamom and ginger to prepare Batheetha. You should use soft dates like Medjool or Sukkary.

You can see Batheeth in all kinds of shapes; flat like a cookie or like a ball, but mostly balls. You might also see it decorated with sesame seeds and nuts. It can also last a few days without spoiling.

Batheetha is but, more of a cookie made of dates than a dessert. The favorite snack of Emiratis to have with Arabic Coffee is, therefore, not cookies.

Every cuisine in the world has their own unique tastes. The signature of Traditional food of UAE is the ubiquity of cardamom, thyme, and saffron. They are also heavily reliant on meat and poultry.

Some people mistake Levantine dishes like shawarma, kunafa, and falafel for Emirati dishes. Levantine and Palestinian dishes have more vegetables and leaves in them compared to Emirati cuisine. Generous usage of olive oil as well is a characteristic of Levantine cuisine.